The chart below shows all 6 employment rates status since 1994. Even though every rate is dropping it is easy to see the difference between the different rates, the U-3 and U-6 in particular. Focusing on the U-3 unemployment rate is a misleading tactic that makes the numbers look better than they are. The U-3 rate focuses on a criteria of the unemployed that does not accurately represent the full present state of unemployment in America. The U-3 unemployment rate does not include the total 94.5 Million Americans who are not in the labor force, it ignores the 1.9 Million Americans who have been unemployed for over 27 weeks and it fails to recognize the 5.8 Million who only work part time because of economic reasons. If the U-3 rate omits so many Americans looking for work, then why is it the official unemployment rate? 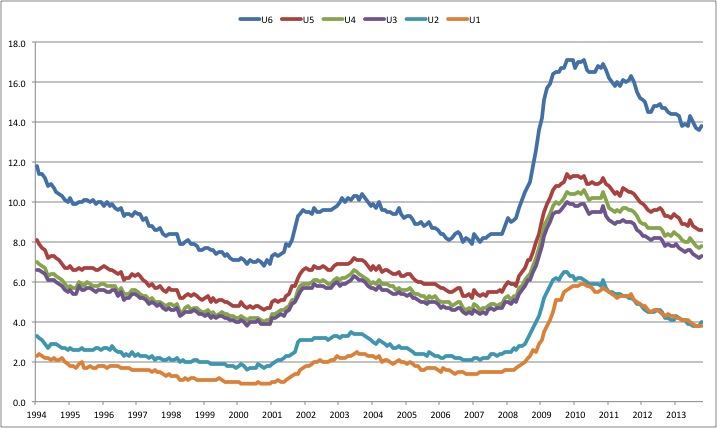 It is clear that unemployment in America is not a simple as either being employed or unemployed. Yet, our official unemployment rate focuses on a smaller criteria then the other rates we observe. Are we doing this so that the numbers look better than they did 8 years ago?  With so many Americans looking for jobs our focus should be on the total unemployment rate and not just those who fit the U-3 criteria.